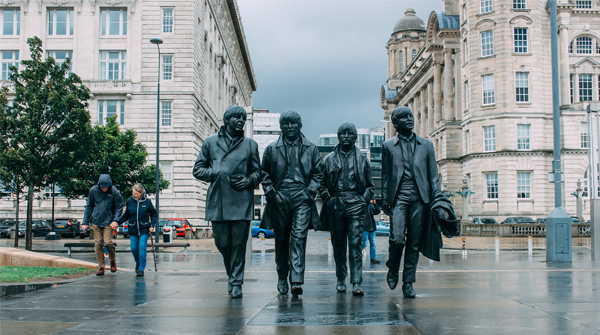 What is the movie Yesterday about?

Struggling singer-songwriter Jack Malik, from an English seaside town, can see his dreams of fame quickly fading, despite strong help and support from his best friend Ellie. A mysterious global blackout causes a freak bus accident, leaving Jack to wake up to a world with no history of The Beatles ever existing. It isn't long until Jack becomes an overnight star after performing songs by the greatest band in history to an audience that has never heard of them.

Who is Danny Boyle?

Born in 1956, Danny Boyle is an English film director, producer, screenwriter and theatre director, more famously known for his work on films such as 127 Hours, 28 Days Later and Slumdog Millionaire. Not to forget his debut film Shallow Grave, which won him the BAFTA Award for Best British Film, as well Trainspotting, which is ranked the 10th greatest British film of the 20th century.

Who are The Beatles?

If you’re unlucky enough to not know the answer to this, then we will briefly explain. The Beatles were an English rock band formed in Liverpool in 1960. The band was made up from John Lennon, Paul McCartney, George Harrison and Ringo Starr, who turned international stars by early 1964, leading the "British Invasion" of the United States pop market.

What songs are The Beatles most famous for?

Staying in the chart for 33 weeks, “She Loves You” was one of the most popular songs followed by “I Want To Hold Your Hand” with 22 weeks. Amongst other songs, such as “Yellow Submarine”, “Hey jude” and “Help!” the Beatles won awards for “The Best Music Video”, “Album Of The Year” and many many more, making them one of Britain's most successful artists.

Who is Himesh Jitendra Patel?

Playing leading role Jack Malik, born 13 October 1990, Himesh is an English actor, known for his 2007 - 2016 role as Tamwar Masood in the BBC soap opera EastEnders. In 2014, Patel starred in the short film Two Dosasas Pavan and has also played the role of a social worker in Channel 4 sitcom Damned up until 2018. Himesh is also a member of the National Youth Theatre and has a hidden talent of being able to sing which is shown in the movie. His next starring role is in the forthcoming movie; The Aeronauts.

Who is Lily James?

Professionally known as Lily James, she plays the role of Ellie in Yesterday. Born 5 April 1989 as Lily Thomson, she is an English actress who began her acting career in the British television series Just William.

This was followed by her role as Lady Rose MacClare in the drama series Downton Abbey, which was then topped by her film breakthrough playing the lead role in Cinderella.

Liverpool and The Music Industry

Liverpool has played a huge part in the music industry, creating not only The Beatles but many other stars also. The centre is home to many tributes to the ‘60s heartthrobs, from the birthplace of The Beatles, The Cavern Club, to their very own statue just by the waterfront. These attractions and many more are only minutes away from Mann Island, making it a top location to see what the city of Liverpool has to offer.

The Beatles Story was opened on 1 May 1990 and contains recreations of The Casbah Coffee Club, The Cavern Club and Abbey Road Studios, along with other historical Beatles items, such as John Lennon's glasses, George Harrison's first guitar and a detailed history about the British Invasion and the individual careers of every Beatle.

With over four million visitors from over a hundred countries by 2015, the museum was recognised as one of the best tourist attractions in the UK. With tickets starting at just £12.50, it’s something you just have to do when visiting Liverpool.

Described as “a glowing tribute to The Beatles and their music” and a “toe-tapping experience” it is one you cannot miss. There are numerous cinemas in and around Liverpool that are now showing “Yesterday” - Odeon Liverpool One is the closest cinema to Mann Island, meaning you’re just across the road to check out our beautiful building from all angles.